FREE SHIPPING WITHIN EUROPE ON ORDERS OF €75+. OTHER COUNTRIES €150+

press Enter to search Showing all results: No products found.

Few Assyrians today can measure up to the breadth of popularity that followed Naum Elias Faiq Palak across his homeland and the diaspora. And yet, only a few people today have actually read his writings, and even less so for his work in his own native language. Today, at best, we might recognize Faiq Palak through the lens of only a handful of articles published across Assyrian magazines and books. We may even recognize some of his work beautifully transformed into song.

A testament to his popularity is the frequent use of his Turkish last name, Faiq, which he used in his widely read Turkish and Arabic texts and works—but in his texts written in Syriac he consistently used his Assyrian last name, Palak. Despite the familiarity we may have about Naum Faiq, there is much more to discover when we orient ourselves within his frame of mind, and within his preferred language, Syriac, that is, when we explore Naum Palak.

Why was he so popular, both in his time and in ours? What does he write about that merits such attention? Naum Faiq Palak, a native of Omid, was the founder of the civil organization Cirutho (Eng. Awakening) in the city of Omid. This organization quickly grew in membership, and local branches began popping up in cities like Kharput, Mardin, Midyat, and Mosul, as well as in the cities of the Assyrian diaspora in the United States, namely, New Jersey and New York. The popularity of Cirutho transcended the primary lingual, confessional, and geographical divide that Assyrians found themselves in, that is, it was well received by both Western and Eastern Assyrians.

Through his active role in Cirutho and through his publications Kawkab Madenho (1910–1912, Omid), Bethnahrin (1916–1920, 1922–1930), Cirutho (1909–1915, New York), for which he was a prolific contributor, and Huyodo (1920–1921, New York), for which he was editor in chief, he called for a national awakening and unity, regardless of one’s church affiliation. Through these publications Palak expressed the importance of education, printing houses, and the continued use of Syriac as the native language for Assyrians of his time. With the writings and poetry collected together in this book, Naum Faiq Palak’s call for these noble ideals may once again be heard by Assyrians of today.

Shortly after his death in the United States on February 5th, 1930, many of his poems and songs were changed and falsified; Othuroyo was changed to Suryoyo. As the reader will notice, the division that we see today with different appellations like Othuroyo, Suryoyo, Oromoyo, and Kaldoyo is a non-issue for Palak; in fact, he uses all of the above terms without any real distinction. In English, he advocated the term Assyrian.

This volume is unique as it presents nearly all of Naum Faiq Palak’s articles, letters, and poems, as published in the magazines noted above, and from other sources such as handwritten documents, books, and other periodicals. I began to collect this source material over 20 years ago, as I sought more information about who he really was, what his literary heritage looks like, and what his role was in the birth of the Assyrian national movement. I collected most of the material in this book when I was Project Manager for the Modern Assyrian Research Archive (MARA), a mission which took me to several archives, libraries, private collections, organizations, monasteries, and churches in the United States, the Middle East, and Europe.

I welcome you to take part in my journey to explore the persona of Naum Faiq Palak, and my subsequent efforts to put together this collection, the sweet fruits of many years of hard but fun and interesting labor.

True to Naum’s call, all of the contents of this book are in Syriac.

If you wish to order more than 5 copies, please contact us at info@ninevehpress.com for quantity discount.

Below are some sample pages presented from the edited book, together with the original texts. 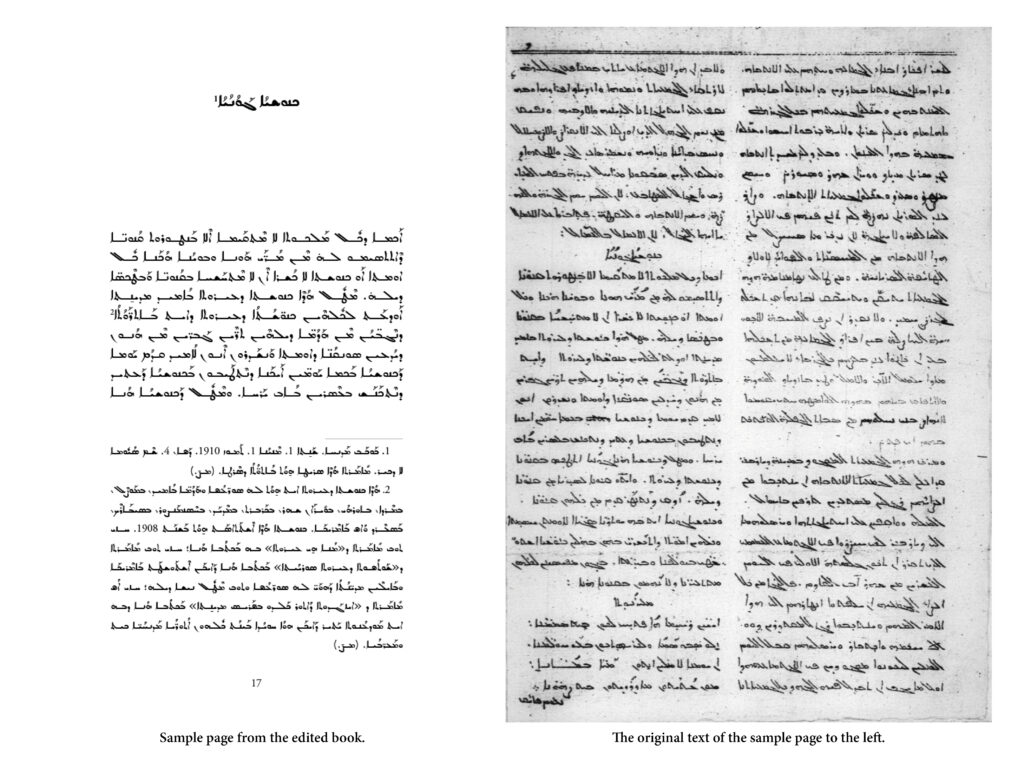 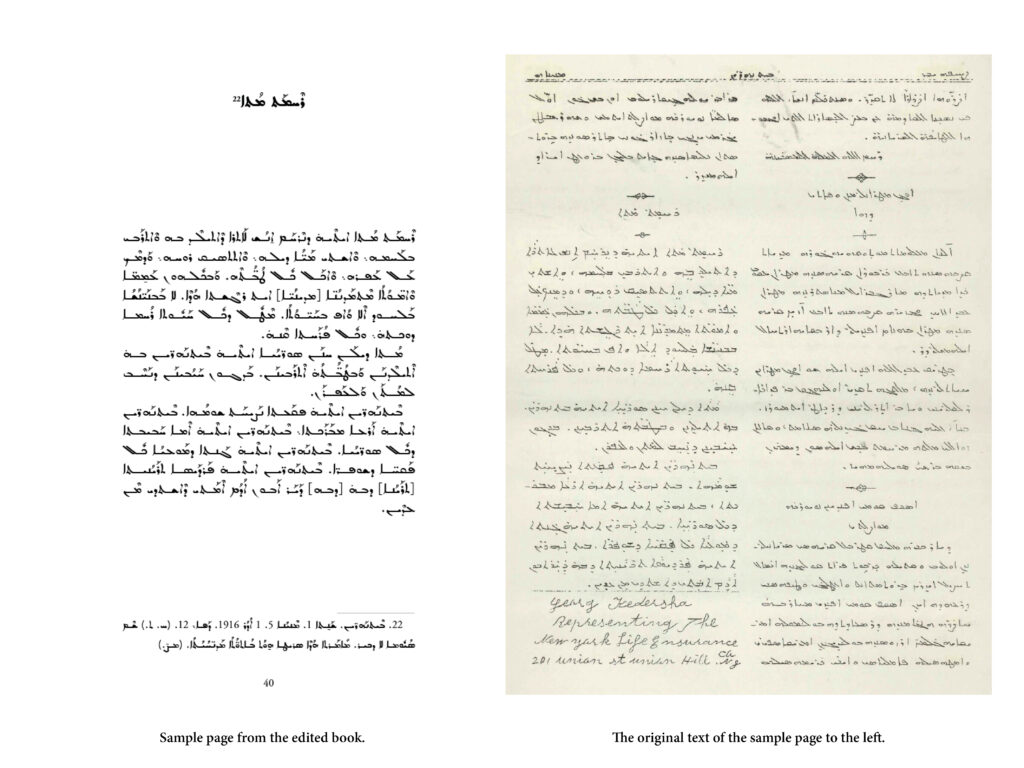 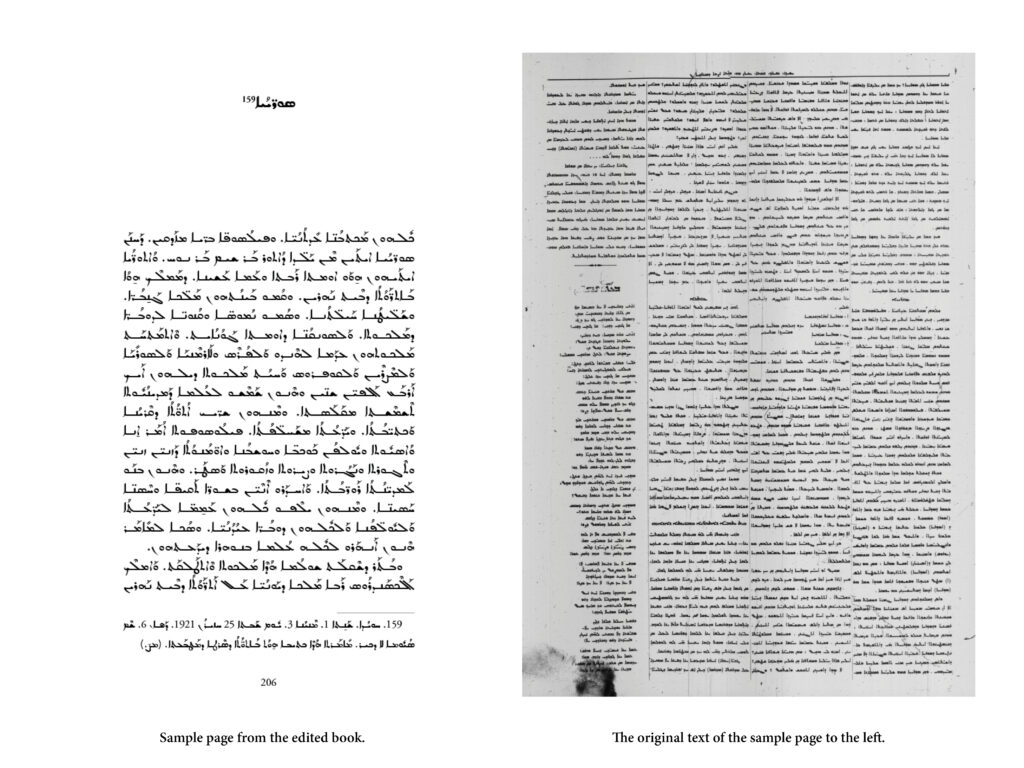